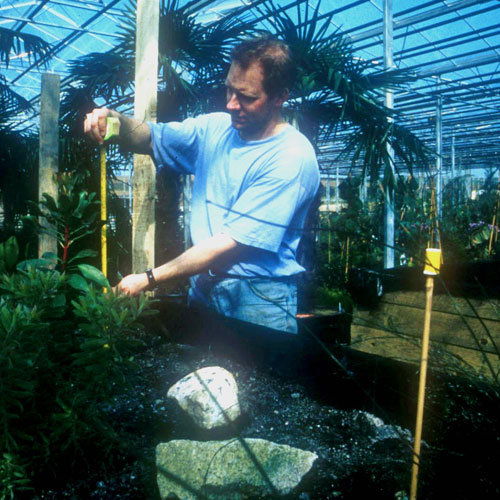 The Eden Project was constructed in a worked out china clay pit. There was no soil, so 85,000 tonnes of artificial soils were created from recycled mineral wastes and composted green and bark wastes. Working in partnership with the University of Reading’s Horticulture Department on a range of artificial soil recipes developed by them, Pete Whitbread-Abrutat instigated pilot scale, artificial soil trials at Eden’s nursery and planted then with a range of plants from the different biomes of the future Eden.

He also established field trials in which in-situ china clay pit substrates were ameliorated with a range of organic amendments. For two years the artificial soils and their plants were monitored and analysed to determine nutritional and plant health characteristics, and to prove to doubters and funders that the novel artificial soils approach would work. On the main Eden site Pete then developed a comprehensive programme of artificial soil trials, testing and monitoring over several years to ensure optimal plant displays for the millions of visitors to the site.

The message behind Eden’s artificial soils is pertinent and has been widely promoted to raise awareness of this approach to improving places with degraded soils.