“The Colour Revolution Can’t Happen Without You” – A Tale of Two Cities. Guest blog by Landlife 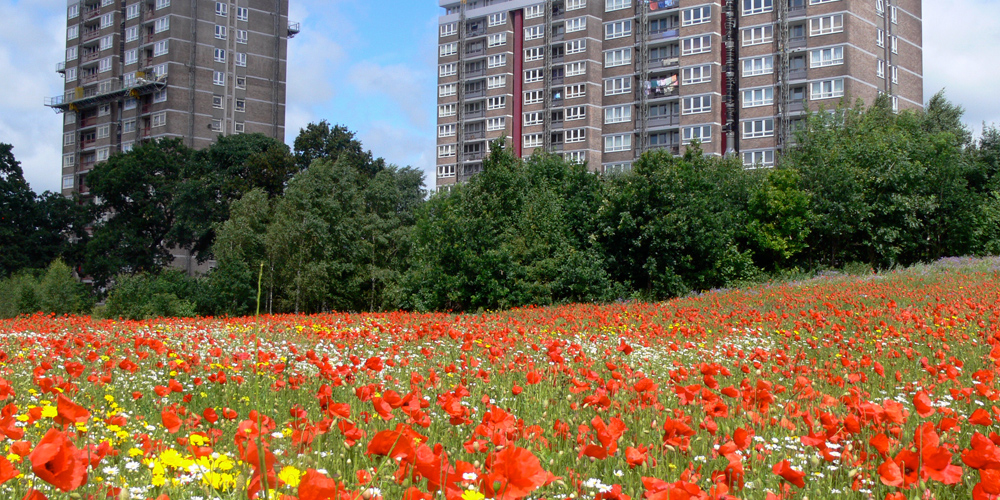 Landlife and the National Wildflower Centre

When Landlife began, as an early advocate for low cost ecological landscaping and creative conservation in inner city Liverpool, there were few people interested in producing wildflower seed and no commercial producers. To deliver projects with wildflowers meant collecting your own seed. To do this on an increasing scale and to encourage others to do the same required dedicated seed production. For urban ecological projects there were no serious legitimate means of funding from government sources until the late 1980s.

Landlife rose to this challenge early, in 1984, with single rows, seed collections and the creation of a dedicated wildflower seed nursery. All the profits generated for the environmental charity were dedicated to Landlife’s advocacy and demonstration of creative conservation philosophy. In the UK Landlife remains the only non-commercial wildflower seed producer. When funding for urban conservation project work is very limited, these incomes have sustained Landlife’s independent status as an environmental charity.

In 1999 Landlife founded the National Wildflower Centre on Merseyside as a millennium project and visitor centre for people to see wildflowers being grown and to act as a base for Landlife’s urban community conservation work.

2014 poppy sowings in Liverpool – a mystery and a delight

Vote for A Tale of Two Cities!

Last year the Royal Botanic Gardens, Kew launched its flagship Grow Wild programme funded by the UK’s Big Lottery Fund. Grow Wild is a four-year programme that will bring people together to sow UK native wild flowers. It will be a beacon for good practice in the use of native wildflowers. The programme intends to create four inspirational flagship sites; one each in England, Wales, Scotland and Northern Ireland, and is running a competition between prospective projects in each of the home nations to determine which will be the flagship projects. Landlife was delighted that such an auspicious organisation was promoting wildflowers, and we were particularly proud to win the tender to supply Kew’s Grow Wild packs nationally.

Landlife and the National Wildflower Centre is engaged in a unique partnership with the cities of Liverpool and Manchester, The National Trust and a North-West collective of organisations, in a campaign to win this funding for our project, A Tale of Two Cities.

If successful A Tale of Two Cities will deliver a cultural project creating native wildflower meadows in prominent urban places in both cities, covering an area equivalent to 20 football pictures in total, including well-loved places like Everton Park, in Liverpool, which features the best views over the city, and Princess Parkway in Manchester which over 100,000 people would see every day. We will be working with local communities in both cities, and in places in between, to bring a celebration of creative education, urban conservation and public participation.

Coincidentally, in August 2015, Manchester is hosting the World Conference of the Society for Ecological Restoration. This will bring hundreds of specialists in restoring damaged environments from around the world to the North-West of England – one of the birthplaces of ecological restoration thanks to the work of Liverpool University’s Professor Tony Bradshaw and his team in the 1970s and ‘80s. A Tale of Two Cities will combine perfectly with the international spotlight brought by the Society for Ecological Restoration conference to raise the profile of the North-West’s tradition of innovative conservation and community action.

Now, after reaching the final stage of Kew’s Grow Wild Landmark project for England, we are eager to win with A Tale of Two Cities and bring this project home to the North-West. It is a huge opportunity to build on what we have achieved over the past 30 years and make people aware of the wildflower seed industry on Merseyside, and to promote the work of the National Wildflower Centre, which is a great place to visit.

We launched our Tale of Two Cities bid with a symbolic linking of Liverpool and Manchester riding the track of the world’s first passenger railway, singing all the way. Travelling with a green goddess in a Brazilian carnival dress, we were saluted just before we set off in the morning by our own green goddess – a combine harvester – and a reading from Charles Dickens book, A Tale of Two Cities. See the music video of the journey here.

Singing our way to Manchester

A Tale of Two Cities will be an exciting mix of culture and ecology. It will make people sing; it will turn hearts and minds; it will give people the chance to make a difference and express their thoughts in special sessions at the Conference itself.

We have reached the very last public vote stage of the competition, which is now live and running until 4th November 2014. So please visit www.vote.growwilduk.com and vote for A Tale of Two Cities and help bring a unique community and cultural thread to the coming Society for Ecological Restoration World Conference.