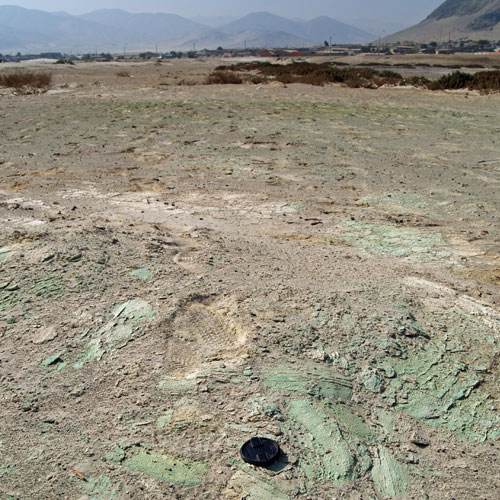 While employed by Wardell Armstrong International, Pete Whitbread-Abrutat carried out a site visit to review environmental and social sensitivities around the potential re-working of 300 million tonnes of copper tailings (mineral waste from ore processing) forming a coastal beach at Chañaral on the desert coast of northern Chile. The work included discussions with national, regional and local stakeholders. The relevant sections of a competent persons’ report was prepared for the client, in accordance with international good practice and JORC code 2004.

The tailings were produced by large-scale copper mining many kilometres upstream of Chañaral. During the middle decades of the twentieth century, hundreds of millions of tonnes of copper mine tailings flowed down the Rio Salado valley into Chañaral Bay causing the coastline to extend to the sea by 1 km. An estimated 250-300 million tonnes of tailings now form an artificial beach 10-15m thick and 4.5km long (see link). Much of the beach is above the high tide mark and is permanently dry in the desert climate. The town of Chañaral is adjacent to the beach and is affected by wind-blown dust from the tailings. There have been numerous studies into the environmental impacts of these deposits.