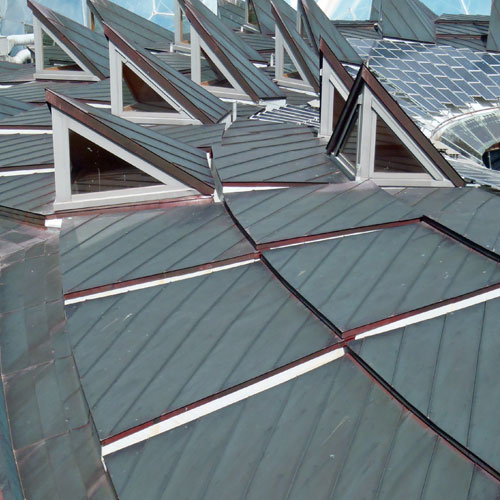 According to the architectural design of the Eden Project’s flagship education centre, The Core, the building required a metal roof. The building explored new territory in sustainable design, construction and use, and the roofing material was no exception.

While working Eden as the manager of the strategic partnership between Eden and Rio Tinto, Pete Whitbread-Abrutat conceived, developed and drove the concept of the building’s high profile copper roof, using it to demonstrate the importance of metals and minerals supply chains in construction. Copper, as used by society, is generally a mixture of the metal mined from various places and the project’s ultimate imperative was to be certain of the source of the copper on the roof. Rio Tinto and the fabricators helped source, transport, and fabricate the copper so that every step in the process was traceable, with a paper trail to prove its chain of custody from ‘rock to roof’. This exemplar construction project raised the profile of metal usage in sustainable construction and provoked wider debate on their supply chains.

The copper roof work stimulated a two-year follow-on project looking more at metals and minerals supply chains in construction and attracted funding from the EU, through the University of Exeter in Cornwall. Pete initiated this project and recruited the project manager. In particular the project aimed to address the aluminium and steel construction supply chains and convened and facilitated regular meetings and workshops, bringing the different links in the supply chain together for the first time in the UK. Till then each of the stages was developing independent sustainability initiatives with respect to its own products, with few joint approaches along the supply chain and, so, few opportunities for synergy. Gradually trust and understanding were built and joint initiatives began to be developed.

← ‘101 Things To Do With A Hole In The Ground” book Environmental & social management & CSR review; Liberia →