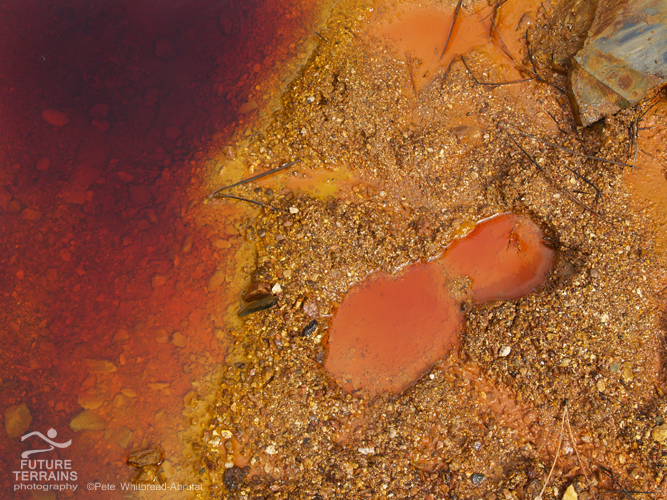 In my last blog I introduced the vexing mine closure issue of acid and metalliferous drainage, or AMD. Acid drainage is a major environmental challenge for the global mining industry, but there are some creatively-minded people who have discovered value in issues as contentious as this, as introduced in this, the fourth #MineClosurePerspectives blog. Here are just three examples to stimulate the grey matter.

‘Mars on Earth’ Tourism. The Red River, or Rio Tinto, of Huelva, Andalusia, Spain is  renowned (even celebrated?) around the world for its extreme acidity, clarity and vivid red hues, as it drains one of the planet’s oldest metalliferous mining districts (see banner image above). It forms a key part of the marketing for an industrial heritage tourism destination (the Rio Tinto Mining Park) based partly on the environmental damage remaining after copper mining. The river and its surrounding park attracts thousands of tourists a year to view it and the man-made, devastated landscape left behind when the copper mines closed.

AMD&ART. By working closely with the post-mining community of Vintondale, Pennsylvania, USA – a community blighted by the back-drop of a toxic wasteland that was once a colliery populated by a proud local workforce – AMD&ART founder Dr T. Allan Comp realised an opportunity for a new approach to dealing with abandoned mines. He catalysed a unique interdisciplinary project involving engineers, scientists, artists, historians, designers and local people to create a recreational area on wasteland – one that respected the local mining heritage and connected with the community. Part of the project includes an AMD Treatment System which, while treating AMD, also explains the underlying science. Alongside it is the Litmus Garden consisting of thirteen native tree species chosen for their autumn colours. Their foliage colours run from deep red at the start of the treatment system to blue-green at the end and represents the decreasing acidity of the water as it passes through the system. (Click on the links in this text to view images.)

AMD Pigments for Works of Art. Many artists around the world have been inspired by the vivid colours to be found in AMD affected waterbodies to use them in their own artwork. Their art is further empowered by the notion of beauty derived from environmental damage – challenging perspectives and encouraging enquiry. One of the most celebrated of such artists is the American professor, John Sabraw, whose work is presented here.

It would be naive to think that approaches such as those outlined here provide a long-sought solution to AMD challenges; but they show that alternative perspectives and different approaches can find aesthetic/ social/ cultural/ economic value in a major environmental problem, and may encourage more lateral thinking in those dealing with mine closure.

#MineClosurePerspectives is produced in support of the international conference Mine Closure 2014. Building Understanding is one of four Future Terrains service areas for tackling the challenge of degraded lands.