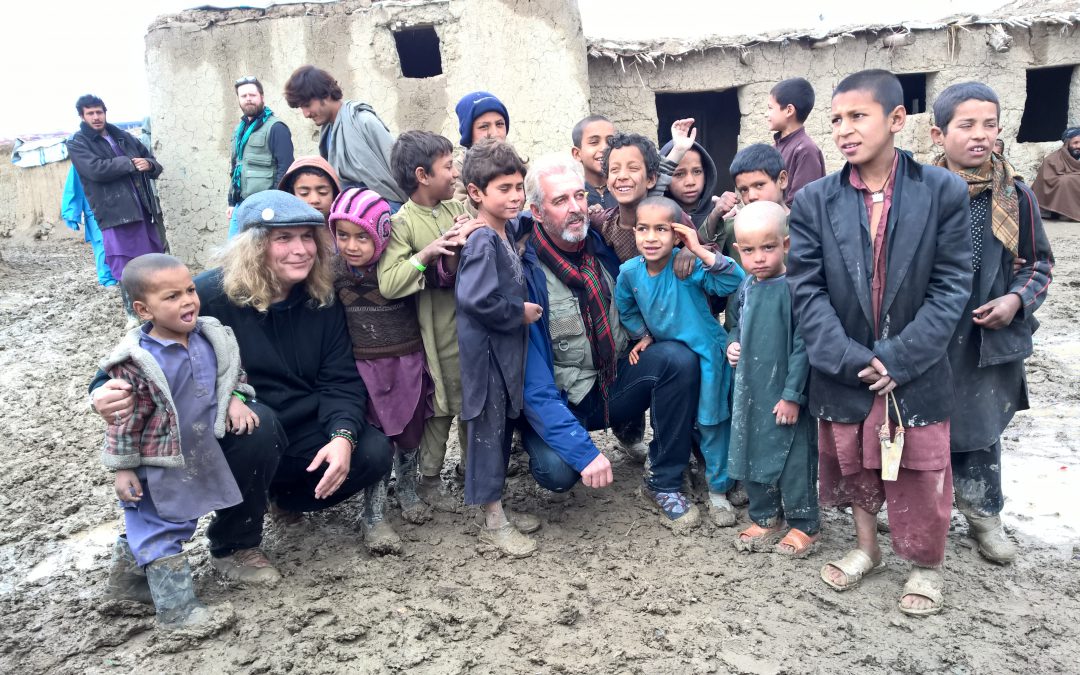 The street corner busker strums simple tunes. His guitar is too small, but his talent accommodates. He wears a flat cap – its grey hue matching the leaden sky. His black trousers and sweatshirt are flecked with the yellow-brown filth that surrounds him – the same mud-shit concoction that forms the walls of the shabby hovels and daubs the slippery, narrow paths that sinuate between them. His music, through the joy it raises in the jostling children that surround him, colours the ambience of this drab place. Reminiscent of busking scenes in cities the world over, this is startlingly different – and compelling. This is no average busker, and this is no normal city street; he is Lanny Cordola and we are in Qambar Camp, Kabul, Afghanistan.

The Qambar IDP camp is one of many in and around Kabul. About 9,000 people exist here on a squalid area the size of two football pitches, essentially squatting on land that isn’t theirs. They are here because they have fled sordid conflicts in the south – particularly in Helmand Province. They did not seek to bang on Europe’s rapidly rising walls, but sought solace in their own country. They exist in a place of putrid mud on the bottom rung of humanity’s ladder. They seem largely forgotten.

A kindly man invites us into his one room hovel. It is the ultimate in basic design; an earthen box with no windows and a tiny, ill-fitting, metal door that floods the internal darkness with light by day, and leaks coldness in the night. His ‘box’ covers ground of about three metres by three metres. The man explains that his family of ten sleep in here every night. His roof leaks badly – evident from the soaking mud walls after another night of heavy rain. The walls and the floor are of the same basic ingredients that we have been trudging through for half an hour: sticky mud, assorted excrement, waste food and stains of bloody spume ejected from someone’s disease-racked body. There is no furniture in the hovel, just a pile of worldly belongings neatly stacked into a corner and off the damp floor. There is no power, running water nor sanitation. And, like the rest of the camp, not a straight architectural line in sight.

The toilet appears to be anywhere that is not inside, although I notice one or two low-walled areas that function as defecation stations – apparent by the brown turds standing proud against the yellow matrix. Discarded spinach leaves lie on the ground – apparently, my security guy tells me, for use as toilet paper.

Outside the hovel someone has cared enough to plant three apple tree saplings. The rising sap, encouraged by early spring sunshine and the nutritious mud, has unfolded tight, winter buds, painting a tiny splash of green against the ubiquitous brown canvas. A sign of hope?

Somehow, someone – a woman most definitely – has managed to wash clothes and hang them on a clothes line – their bright colours magical. How on earth is it possible to make anything clean here?

It is easy to peer over the low hovel walls to view the appalling state of their roofing. Some have gaping holes, others with degraded, partly-collapsed tarpaulins that fail to cover the living space beneath. David Lavery – the chap leading our visit today –  has volunteered responsibility to agitate, cajole and organise to provide sufficient high quality tarpaulins for all of Qambar’s wretched hovels – the Keep Qambar Warm campaign. He is an impressive combination of persuasion, motivation and inspiration. At the time of writing the Keep Qambar Warm campaign has raised over $7,000 and the first instalment of tarps is being shipped to Kabul by Nomad International. There is still a long way to go till all the dwellings have leak-proof roofs, but it’s an impressive start in less than three months.

Much of the annual rainfall in this part of Afghanistan falls in heavy downpours in March, which is when we are visiting – rain clouds gather again over the surrounding peaks of the Hindu Kush, while the city’s streets are still inundated from the last deluge.

The rain has turned Qambar into a quagmire, except it isn’t just mud that we are struggling through. We slither through the filth further into the camp. The mud clarts our shoes, doubling the weight of our feet whilst simultaneously reducing their traction to almost nothing. It’s very difficult walking – even in our expensive hiking shoes. God knows how the camp dwellers manage. I watch them struggle. A ditch of fetid water drains the middle of the ‘lanes’, its putrescent dredgings are piled either side forming a camber to direct the unwary and unstable into the yellow fluid. I watch little kids wearing flip flops – even bare feet – lose their balance and slide awkwardly into the putrid channel. They get up and carry on! With deep concern I consider what diseases they have and whether they will be alive next time I come.

We stumble gingerly onward. Turning another corner, we see something that in any other context would be ordinary, but here is remarkable. It’s a small ‘village’ shop with neat – albeit crooked – shelves and windows! The shelves are lightly stocked, but the shop is tidy and clean. The most noteworthy thing is the small rectangle of bright green lawn outside that someone has tended in the muck, elegantly trimmed with diagonally upended bricks and planted with small trees. A canary in a cage on the ‘lawn’ pierces the gloom with an uplifting trill.

I am slightly paranoid moving around Kabul at the best of times, and visiting a place as run-down and unpredictable as this almost sends me over the edge. Qambar Camp is a dangerous place. In 2008 the Canadian Journalist Mellissa Fung visited the camp to craft a report for home broadcast. She was stabbed and abducted by a criminal gang before her release a month later. Mellissa returned to the camp last year to complete her original story. (Please take some time to watch Mellissa’s powerful documentary on Afghan women caught in the cycle of violence, via this link.)

We are attended/ guarded by well-trained, highly experienced security specialists who have spent most of their time since the 2001 change of regime working in the most dangerous parts of this dangerous country. Do I feel threatened? Not really, the people who live here are friendly and most want to talk with us; I don’t think they see that many western strangers showing an interest in their plight.

But danger is posed not just by the psychotic or deluded; we turn a corner by the little shop of cheer with its lawn and canary to be met by a scene of grief. The recent rain has eroded the mud walls of some dwellings and here, overnight, just a few hours before our arrival, it caused the collapse of one hovel killing an 18-month old child in the process. The site is a scene of mournful activity as men in sandals dig through the mud and rubble with shovels and their bare hands.

Digging in the remains of a Qambar hovel

The despairing father, standing proud but numb, converses with David through our translator and colleague, Baktash. The father is worried for all the children in the camp: this is a dangerous place with disease and unstable structures only too ready to collect an unsuspecting young soul. We talk for a few minutes on the site of the death beneath our feet. I take notes and pictures and try to justify to myself that, somehow, this will make a difference; but, in reality, it’s just an act – frustratingly there is nothing we can do to alleviate his tragedy. An emotional rollercoaster accompanies all in places where humanity is on the brink.

Of the three fundaments to human life – shelter, sustenance and soul, shelter and sustenance enable existence while soul converts existence to living. The work of the Keep Qambar Warm campaign, run by Afghanistan’s exemplary Zwan Family Charity, aims to tackle the first of this triptych of life, while UNOCHA assists with sustenance – basic food and water. Lanny, through his charity The Miraculous Love Kids, provides the third.

The Qambar kids overcome their initial trepidation and gather around the busker. Lanny patiently offers each a chance to strum his guitar while he fingers chords on the fretboard to craft a simple tune. There is laughter and music and smiling. I wonder of the last time some of these children smiled. Lanny seeks audience partition as he implores the roaring crowd to sing the one-word song that he has crafted on the spur of the moment. The word is ‘Dosti’, which means ‘peace and love’ in Dari – Afghanistan’s main language. Eventually the kids get it and sing along.

As the music and laughter play, the sun emerges. In the distance, far beyond the camp and Kabul, bejewelled mountains of the Hindu Kush sparkle resplendent in their snow-blanketed majesty. For a while we forget the grinding poverty that surrounds us and smile and laugh and tap our muddy feet.

This article was written in support of the Keep Qambar Warm Campaign and The Miraculous Love Kids. Both aim to improve the lives of some of the poorest people in the world. They won’t change the world – no-one can do that alone; but they will change someone’s world – just a little. Both campaigns are run by volunteers with hardly any overheads to speak of.

In Afghanistan a small amount of money can make a big difference on the ground; just US$25 (or about £17.50), will pay for a high quality tarpaulin that will keep a family dry. If you’re feeling generous, please make a donation through either – or both – of these go-fund-me links: Keep Qambar Warm and The Miraculous Love Kids. And if you feel that you can’t make a donation, then that is fine too – and thank you for reading this far.